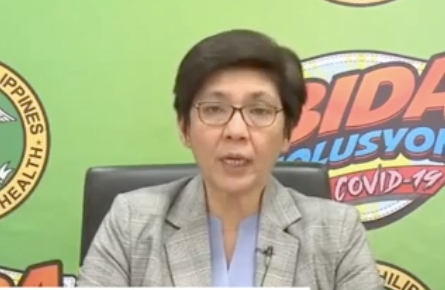 MANILA, Philippines – The Department of Health (DOH) pointed out on Wednesday that it was wrong to equate funds paid to hospitals by Philippine Health Insurance Corp. (PhilHealth) to the number of COVID-19 cases recorded in their communities since the amount they received was based on the claims they made last year.

Under Secretary of Health Maria Rosario Vergeire explained that PhilHealth’s Interim Reimbursement Mechanism (MRI) operates based on historic claims made by a hospital in the first three months of last year.

“The data you see now is based on claims from last year. There was no COVID-19 at the time, so it’s not fair to compare it with the number of COVID-19 cases in the region, ”Vergeire said.

When the Senate hearing resumed Tuesday into allegations of corruption and irregularities at the state-run health insurance company, PhilHealth said the Southern Philippines Medical Center (SPMC) in the hometown of the President Rodrigo Duterte of Davao City got most of the MRI as he received 326 million pesos.

PhilHealth made these disbursements known on April 7.

Data from the World Health Organization showed that as of April 6, the Philippines had 3,660 confirmed cases, of which 54% were in metro Manila, 7% in Calabarzon and 3.3% in central Luzon. .

The DOH regional office in Davao reported 80 confirmed cases at the time.

The SPMC was then among the first five subnational hospitals to help the Tropical Medicine Research Institute test, treat and manage cases of COVID-19 since the start of the epidemic.

The PGH, Lung Center, and Jose N. Rodriguez Memorial Hospital and Sanatorium were only designated as COVID-19 referral centers in early April.

Country’s “Biggest Hospital” Vergeire said one of the reasons SPMC was at the top of the list was because it was the “biggest hospital” in the country, meaning it hosts many patients. She noted that SPMC has 1,200 beds.

Republic Law 11326 signed by President Duterte in April last year, however, increased the capacity of the SPMC to 1,500 beds.

“It addresses a lot of cases, even specialized cases. It has a specialty for heart and cancer and other specialist services. [SPMC also has] high technology [equipment] because we are trying to make this hospital one of the leaders in Asia, ”she said.

In mid-March, PhilHealth chief Ricardo Morales said the company had proposed MRI to “provide healthcare providers with much needed cash to adequately respond to the pandemic.”

“These are extraordinary times that require extraordinary action, and this arrangement will certainly be helpful in President Duterte’s determination to prevent the spread of the virus,” Morales said.

PhilHealth chief earlier told MRI critics it was “premature” for them to conclude that hospitals in areas with low COVID-19 rates should not have had access to MRI funds because he reminded them that the transmission of the virus remains a threat.

“Remember, we haven’t mastered the transmission yet. With [stranded people] Coming home in droves, a spike in cases is always a very real possibility, ”he said.

Malacañang said on Wednesday that he found nothing wrong with SPMC receiving the highest amount of refunds from PhilHealth.

Presidential spokesman Harry Roque said reimbursements to hospitals were based on their claims to PhilHealth and that SPMC had the highest PhilHealth income, reaching more than 1 billion pesos.

“Historically, SPMC has had the highest number of complaints due to its regular provision of health services to patients across Mindanao,” he added.

In a telephone interview with Inquirer Mindanao on Wednesday, Dr Leopoldo Vega, who was head of the SPMC for 12 years before his appointment as Under Secretary of Health earlier this year, said the hospital still had 300 million pesos of unpaid debts from PhilHealth for 2019.

Vega said the P326 million cash advance from PhilHealth was crucial in preparing the hospital for COVID-19 in southern Mindanao.

In addition to the main hospital, SPMC also has stand-alone specialist buildings, including the heart institute, cancer institute and intensive care complex.

—With reports from Leila B. Salaverria and Germelina Lacorte