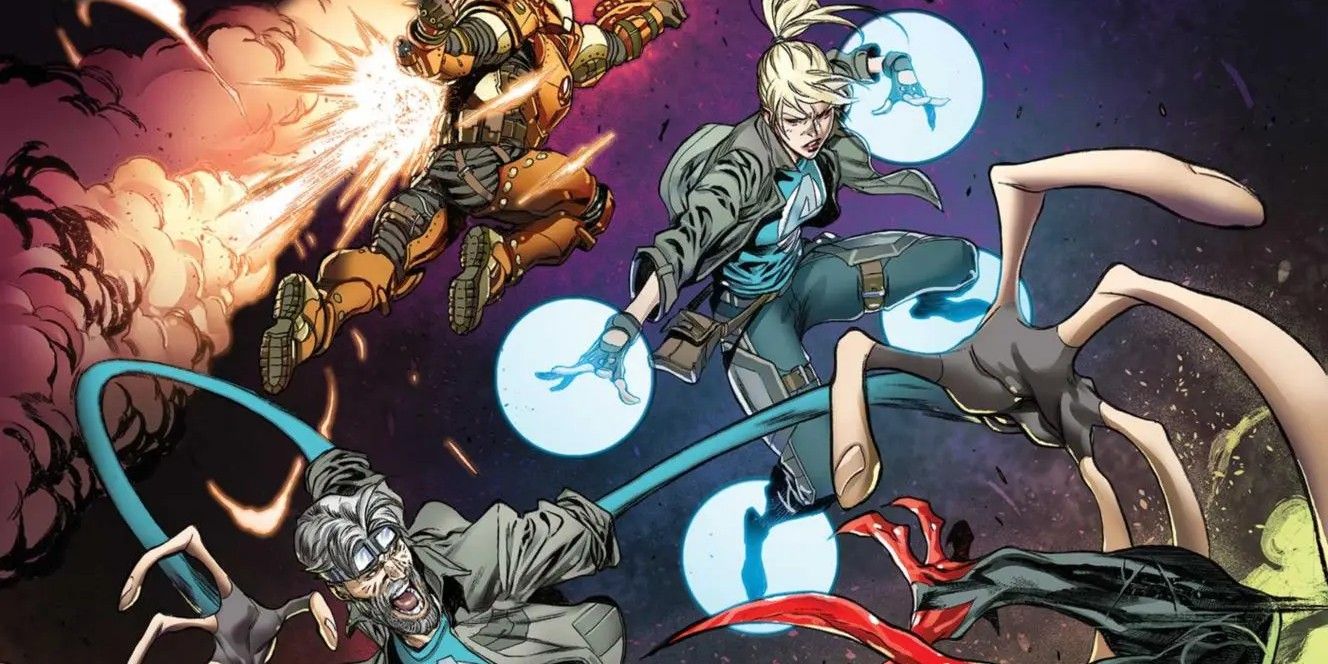 Dark Ages #6 pulls the apocalyptic story to a rushed but satisfying conclusion, with stunning artwork and almost every Marvel hero and villain.

When the heroes of the Marvel Universe first felt the shattering tremors, no one knew that a mechanical giant, corrupted by dark energy, was trying to free itself from the Earth’s core. To stop this Unmaker, Doctor Strange, with his dying breath, opened a portal to a realm emitting perpetual electromagnetic pulses. While this stopped the machine in its tracks, it also plunged the world into total darkness and prevented the operation of any electrical equipment. Gradually, society adapted to these changes and united under the guidance of superheroes to create its own corner of utopia. In the dark times series, dark forces plot as Apocalypse wants a taste of the Unmaker’s powers. Led by the talented team of writer Tom Taylor, artist Iban Coello, colorist Brian Reber and VC letterer Joe Sabino, dark times #6 leads the fight against the First Mutant and his fearsome lackeys.

dark times #6 opens with Miles Morales explaining how he met Venom after the world went dark. Eventually the Carnage symbiote merged with them and since then they have been working for Apocalypse with the promise of an exit from the planet once the powers return. The story then moves to the Louvre Museum in Paris, where En Subah Nur forces the world’s greatest minds to find a way to block the electromagnetic pulse. Tony Stark has hatched a plan, but he needs a strong metal like adamantium. Luckily, Apocalypse has a Triclaw Adamantium deposit in his dungeon. Meanwhile, Spider-Man and the other heroes, including Doctor Doom, have reached Paris, where familiar faces greet them.

Since the first issue, dark times was a story of survival. Whether it’s an onslaught of Ghost Raiders or impending doom from the tyrant Apocalypse, Tom Taylor’s writing speaks to human nature to defend against the odds, especially when the life of loved ones hangs in the balance. The heroes have suffered insurmountable losses and reunited with old comrades on their journey to Europe, while the villains anticipate the success of their insidious plan. This allows for interesting exchanges between characters on both sides as the atmosphere becomes charged with war. Despite the jokes and witty jokes, the narrative is plagued by cliched tropes, turning the characters into one-dimensional cartons, as the rush to reach an amicable end becomes the top priority. Although Spider-Man’s first-person narration serves as exposition for readers, its tense play-by-play narrative reduces visual storytelling to a mere montage of action scenes.

Clean contour lines and bold inking by artist Iban Coello add lively energy to the panels. There’s a definite influence from Japanese manga art in his pencil work, but the way he wraps the characters in sand and grime, using copious amounts of hatching, gives an intense look to the visuals. Almost every Marvel superhero and villain makes an appearance in this issue in a climactic tale reminiscent of old-school All-Out Battles. Coello gives each of them a weathered look and additional clothing to account for the time frame. Colorist Brian Reber uses muted tones in the background and bright undertones on the figures to create a distinctive feel of an apocalyptic event.

Barring the glaring storytelling and pacing issues, dark times #6 is an entertaining alternate universe tale based on a great premise that has the right amount of action and suspense. The story also doesn’t shy away from showing off a bit of gore and violence, which adds more flavor to Coello’s visually stunning work. However, there are times in the book where fan-favorite characters meet an anticlimactic ending out of nowhere that might rub fans the wrong way. While such graphic imagery showcases the cruelty of the antagonist, the sacrifices don’t really contribute to the plot. Always, dark times #6 gives the miniseries a satisfying ending and is a must-have for all comic book fans.

Sayantan is an India-based comic fan who loves good storytelling more than anything else. His power to bore people to death with Kaiju lore is matched only by his love of books and movies. He has a Masters in Energy Tech and enjoys watching football. You can take a look at his works here: @kenichikyuro