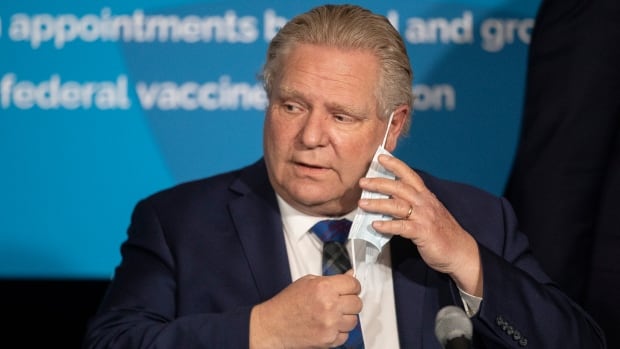 Residents of Ontario will soon have to show proof that they have been fully vaccinated against COVID-19 to dine indoors in restaurants and go to gyms and theaters – but not necessarily to enter retail stores – the province announced on Wednesday.

The “enhanced COVID-19 vaccine certificate” system, as the Ontario government calls it, will come into effect on September 22.

At a press conference on Wednesday, Premier Doug Ford said the new system was the result of “extensive conversations” with experts based on “evidence and the best advice.”

“We have to protect our hospitals, we have to avoid blockages at all costs. We want our children in schools and our businesses to stay open,” he said.

You can read the full province map in detail at the bottom of this story.

Initially, fully immunized Ontarians will need their current receipt along with a valid photo ID to enter premises covered by the new system.

Receipts can be printed or downloaded as a PDF file on smartphones. “Fully vaccinated” here means having received two doses, the most recent being at least 14 days old. Neither a recent COVID-19 infection nor a recent negative test will replace two injections, officials said at a morning media briefing.

During the briefing, officials said the improved certificate system is meant to be temporary, although its lifespan will depend on how the fourth wave of the pandemic unfolds in the months to come.

The government says that on October 22, it will switch to certificates that include QR codes that contain much of the same information that appears on receipts that are already available. Along with this change will be the release of a “verification app” that can be used to validate QR codes and provide an individual’s immunization status.

Officials said the purpose of the app is to take the strain off businesses and facilities from having to determine whether or not a customer has been vaccinated.

The intention is for the improved certificates to be usable in other provinces with vaccination passport systems in place, and eventually to be integrated with the federal passport for international travel, officials said.

Where will the proof be needed?

The vaccination certificate system will cover “high risk” indoor spaces where masks cannot be worn at all times, officials said. It applies to the following parameters:

The vaccination certificate system does not apply to employees in these settings.

Essential retail businesses, such as grocery stores, are exempt, as are places of worship and hair salons, along with other personal care businesses.

The system also exempts children who do not qualify for vaccines (those born in 2010 and later in Ontario) and provides for personal medical exemptions that will be reflected in impending QR codes, officials said.

The verification application will be made available to all businesses. Therefore, non-essential retailers can implement their own vaccination policies for customers, officials said.

Enforcement of the certificate system will fall under the Ontario Reopening Act, officials said. Businesses, facilities and individuals who refuse to comply face fines.

There are still several critical elements of the plan being developed, officials said, and more specific guidance is expected in the days and weeks to come.

The news comes after days of deliberation

The news comes after two days of deliberations by the Prime Minister and his cabinet. A source familiar with the discussions told CBC / Radio-Canada that an initial proposal prepared on Monday was rejected.

Sources said last week that some members of the Progressive Conservative cabinet were against the province implementing its own system of vaccination certificates, such as those introduced in Quebec, British Columbia and Manitoba.

Until recently, Ford and Elliott had both said repeatedly that Ontario would not follow initiatives taken in other provinces. Earlier this summer, Ford told reporters he believed a vaccine passport would create a “divided society.”

The couple also insisted that the vaccine receipts currently available in the province would be a suitable alternative to a passport system. Critics said the receipts were likely to be forged, and briefing officials tacitly acknowledged this, saying QR codes would be safer.

Pressure has grown on Ford and his government from a myriad of doctors, infectious disease specialists and business groups to institute such a system as the province navigates a fourth wave of the pandemic.

Millions of students in Ontario are also expected to return to class next week, with children born in 2010 and later still unable to be vaccinated against the virus. The highly contagious delta variant continues to circulate in Ontario, although indicators show its spread has slowed in recent weeks.

As of Tuesday, 76.4% of eligible Ontarians had received two doses of the COVID-19 vaccine, or about 67.7% of the total Ontario population.

Toronto infectious disease specialist Dr Isaac Bogoch and former member of the now-disbanded Ontario COVID-19 Vaccine Distribution Task Force applauded the introduction of a passport system, but warned it will not was not a panacea to end the pandemic.

“Passports for vaccines will not end the pandemic. They will not create perfectly safe indoor spaces,” he said in a series of Twitter posts. “They provide an additional layer of protection to help create safer indoor spaces.”