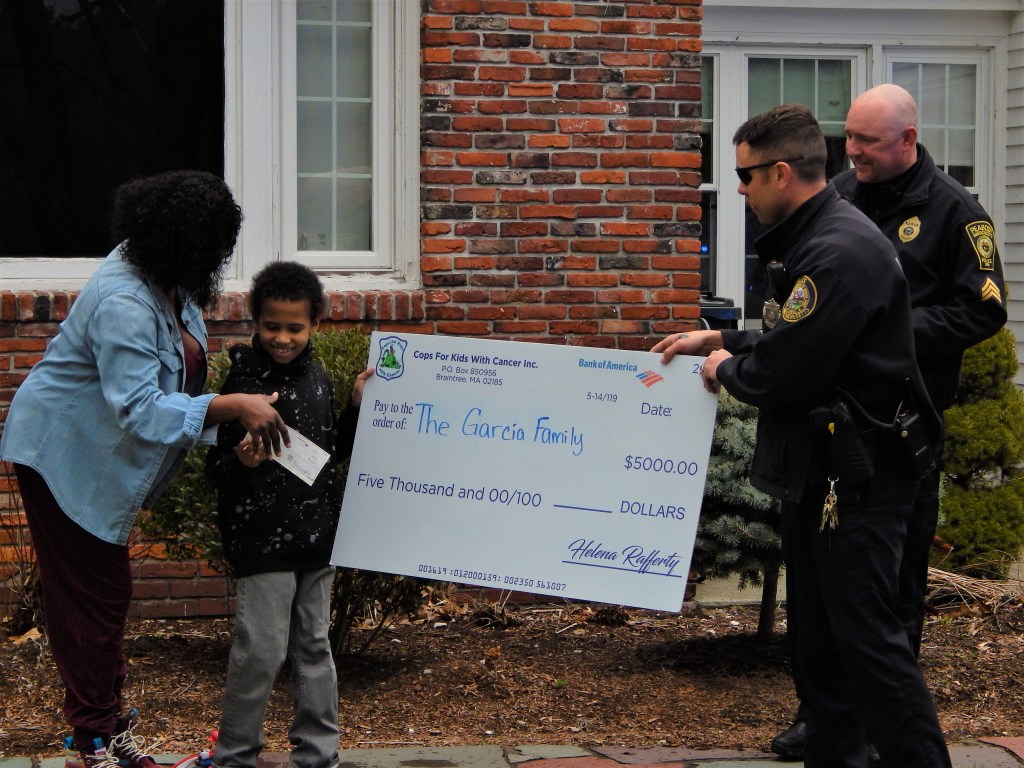 DRACUT – With rain clouds hanging over Dracut on Saturday afternoon, a convoy of Lowell Police cruisers, their emergency lights flashing, rolled down Broadway Road and stopped in the driveway of 9-year-old Nelson Garcia and his family.

Peabody Police Sgt. Jim Harkins, along with several members of the Lowell Police Department, were there to present a check for $5,000 to Nelson, who recently completed treatment for a rare form of cancer called nasopharyngeal carcinoma.

“We’re here to put a smile on your face,” Harkins told Nelson as the smiling boy and his family saluted police in their front yard.

The check was provided by the non-profit organization Cops for Kids with Cancer. The organization donates money collected by police across New England directly to people age 21 or younger battling cancer and their families to help with the financial burdens that come with being diagnosed with cancer. cancer.

According to the organization’s website, the charity has provided $4.3 million to 762 families across New England over the years.

“It’s the best part of my job,” Harkins said after delivering the check to Nelson’s family outside their home.

Harkins, who sits on the board of Cops for Kids with Cancer, said the organization receives referrals for potential recipients of the funds. They then consider the recommendations and proceed to a vote.

Harkins said Nelson and his family were the obvious choice.

She explained that it wasn’t until last year, when the family was living in Lowell, that doctors discovered a tumor in the back of Nelson’s nasal cavity. The finding was diagnosed as nasopharyngeal carcinoma, a rare head and neck tumor that originates in the nasopharynx, according to the Johns Hopkins Medicine website.

Green-Garcia recalls a poignant comment Nelson made shortly after his diagnosis.

“He said, ‘I wanted to spend time with you and Dad, but I didn’t want it to be in the hospital,'” Green-Garcia recalled. “It made me control myself and realize I was working too much. and that I don’t spend enough time.

“It’s crazy how life can stop you in your tracks,” she added. “Once you think you’re doing everything right, something can happen that will make you stop, slow down, smell the roses, and see what’s important.”

Green-Garcia said her son – who she describes as “an old soul” – remained strong throughout chemotherapy and radiation. She added that there were no signs the cancer had spread.

“There are so many people to thank,” Green-Garcia said of the medical teams who helped her son. “I just want to express how grateful I am.”

The family have since moved from Lowell to their new home on Broadway Road, located next to Brox Farm, where Green-Garcia works as a manager.

Green-Garcia will sit down with Nelson to discuss what to do with the $5,000, though she plans to put some of the money in a savings account she set up for Nelson and her sisters.

“I’m also going to save a few stages to see what he wants to do,” Green-Garcia said. “They asked for a dog, so since we finally moved, maybe they can get one.”

For more information about Cops for Kids with Cancer, or to donate, visit the organization’s website at copsforkidswithcancer.org. The association also has a Facebook page.